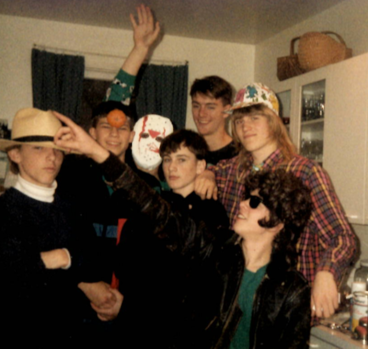 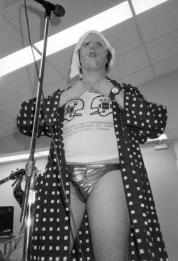 What’s your most memorable gig?
MH: For me it’s the baby pool show at Glebe High School. I had a baby pool full of soapy water to frolic in, got a blender full of fish and lime juice dumped on me, Mal demonstrated the “Yo Joe!” sodomy position on me in the pool and (most importantly) we crossed over from being theoretically dangerous to literally so.

MF: There are lots but one of my favourites is when we had a Montreal gig cancelled. We decided then and there that we would play a show that night no matter what. We went around to a couple of bars and in the second one, Nick knew a member of the band so we hustled our way onto the bill. We passed the hat and made $28, which I was pretty impressed with until I found out that our friend had put in $20. Nonetheless, I’m glad we had the moxie to make that happen.

FR: I still have the fondest memories for a show we played in this garage across from a strip club in Sherbrooke, Quebec in 2000. Full of drunk, underage francophone kids who got really into the set, we played with a primal energy that I haven’t quite channeled since. Bruford won a bunch of money on the fruit machine at the strip club beforehand and later the cops broke up the gig. Couldn’t ask for a better night.

AT: At a Gong Show-themed event in Toronto, I got in to a shoving match with a burly meathead who was heckling our opener, Mike Foxxx. Having antagonised the audience, the vibe was already charged when we took the stage, and became literally so while we played: some grounding problem with (or sabotage of!?) the electrical current caused my fingers to conduct electricity via my guitar stings, and I received a jarring shock of electrocution with every note I played. 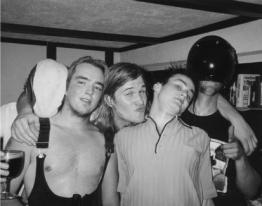 Tell me about some venues you have played at?
MF: Skinhead basement party, karaoke boozecan in a church basement, teenage drinking party in a strip club basement… hmm, I sense a theme here…

FR: One of my favourites was this Karaoke Bar that wasn’t even a Karaoke Bar. Ottawa’s best Karaoke host, Carmen (RIP), relocated at one point to a boozecan that some old Chinese guys set up in a community centre gym. We managed to sort out a gig there opening for him and it was amazing, we opened for Karaoke – and brought a decent crowd too. The regulars didn’t really know what to make of the whole thing.

AT: Carman’s karaoke speakeasy in the back room of Christ The Saviour Orthodox Church in Ottawa’s Chinatown. An all-ages punk basement speakeasy in Sherbrooke (while the cops circled outside). Club Zone, a cheesy bar next to Concordia University in Montreal where we successfully crashed the bill on the day our scheduled gig fell through. Planet Kensington in Toronto (several times). Saw Gallery, Café Alternatif and Porter Hall in Ottawa throughout the 90s, Tex Mex’s parents’ basement in Ottawa, and Dave Dawson’s parents’ basement in Ottawa. 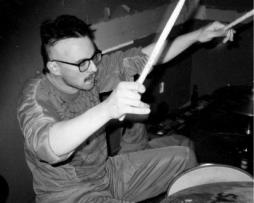 Please list some of your favourite stage costumes.
MH: My first Stains costume will forever be my favourite. Fuzzy white fur hat, coconut bra, hollowed out cucumber. Everything since then has been a disappointment.

MF: Nick covering his face in Band-Aids, Mark wearing a hollowed-out cucumber taped to his penis, Yogurt Boy’s iconic helmet… there was also a time when Nick and I dressed as riot grrls – we had torn shirts, miniskirts and the words “SLUT” and “WHORE” written on our midriffs in black marker. Somehow I don’t feel like that would go over well today, but I guess you had to be there…

FR: My Spiderman with moustache and mohawk remains my best look. Not just on stage, but in life. 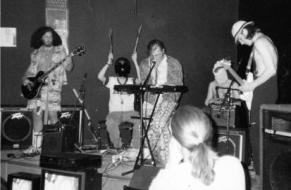 Did you ever have any groupies?
MH: You mean other than Fraser?

FR: Not sure about groupies but I think Bruford started a relationship with a long term girlfriend right after he and The Mighty Moose of Ages made out in the peanut butter and chocolate sauce filled kiddie-pool at the ’93 Glebe Fringe Festival show in Ottawa. That kind of thing really says “good boyfriend material.”

What’s on your rider?
MH: In a perfect world, a large deli spread with a selection of alcohol; this may sound stupidly modest but since the reality is going to be “you can change in the washroom” it seems like a dream.

In the Another Video video, what were you pouring on each other and rolling in? https://www.youtube.com/watch?v=ceUoed9z4DI
MH: Part of that is the soapy water, fish and lime described above. There is a also a snippet of Nick and I wrestling and covering each other in peanut butter and chocolate sauce.

MF: I can’t remember all the ingredients, but it definitely contained frozen fish sticks. 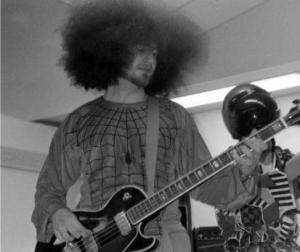 What is your personal favourite song? Lyric?
MH: Super Christ Brothers, “You can all fucking suck me” from the same.

MF: I really like a lyric that Nick sang on the recorded version of “Super Christ Brothers.” He was just ranting incoherently for the most part, but the only decipherable lyrics are “That’s all right, do what you want. Why is that what you want?” I’m quite sure it was just off the top of his head, but I still think it’s pretty deep.

AT: Song: “Cold Frankfurter.” Lyric: “That’s alright/do what you want/why is that what you want?” (from “Super Christ Brothers”).

Will there be nudity at any of your upcoming shows?
MH: Not sure. Gratuitous nudity was always my department, and while I’m not planning anything at this time I’m certainly not opposed to it. At all.

FR: We’re not quite the lithe young studs we once were but it shouldn’t be ruled out.

AT: Only the truth will be naked. 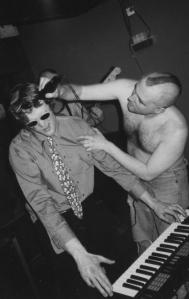 Most memorable Permanent Stains concert attendees or events at concerts (ie. bar brawls).
MH: I think Mal losing his shit and beating on Nick and I in Ottawa during our 14th Anniversary Tour is my most memorable. Nick was getting it for trying to shave Mal’s head, I was getting it because Mal just assumed I was involved.

FR: On the bar brawl front: Malstain and Bruford once got into a full-on tussle on-stage after Bruford tried to shave Malstain’s head as a surprise during a song. The razor gouged into Mal’s head and cut him open, he responded with a wild haymaker in Bruford’s direction and a donnybrook ensued. Fortunately Yogurt Boy (actually a stand-in for an AWOL Yogurt in the form of Christian Moreton, our tour manager) jumped into the fray and diffused it with a sort of blanket hug that cleared the red mist.

AT: Members of Mighty Moose’s church group, in attendance at the Liam’s basement show in Ottawa, where they witnessed Mal biting the tip off Mighty Moose’s hollow cucumber codpiece.

Are you familiar with the Real Housewives franchise on Bravo? Who do the Stains most resemble?

FR: I am familiar with this franchise. We’re the musical equivalent of Lisa Rinna’s lips.

So there you have it. Fulsome, mesmerizing, notorious, and cherished by Harry Hamlin, The Permanent Stains’ 30th anniversary tour will visit: