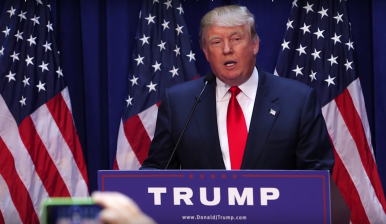 We are working helping one of are [sic] associates out at Gotham GR – with a big event happening on TUESDAY 6/16/15.

This is an event in support of Donald Trump and an upcoming exciting announcement he will be making at this event.

This event is called ‘People for a Stronger America.’ The entire group is a pro-small business group that is dedicated to encouraging Donald Trump and his latest ventures. This event will be televised.

We are looking to cast people for the event to wear t-shirts and carry signs and help cheer him in support of his announcement.

We understand this is not a traditional ‘background job,’ but we believe acting comes in all forms and this is inclusive of that school of thought.

This will take place inside / interior.

We would love to book you if you are interested and still available.

Please let us know and we will get back to you with confirmation.”

It takes hard work to make a good leisure suit

“As comfortable as you are in your Jaymar coordinated outfit, you may not be aware that you’re wearing a veritable work of art. From collar to cuff, there’s hardly a quality touch that we know about that we don’t include.

The lining of the jacket, your shirt, and that reversible belt look like they’re made of the very same fabric. Because they are. And that takes some hard planning.

Your jacket feels so good because its tailored like a sportcoat, not like a heavy shirt. And that great styling that looks up-to-date today will still look up-to-date years from now. And that’s not easy, either.

We won’t even mention all the countless other details that make a Jaymar leisure suit or coordinated outfit what it is. We’ll just get back to work. Because you’re sure to want another one.”

In 2014, the actress and lifestyle blogger Gwyneth Paltrow announced her divorce from the musician Chris Martin with a post headlined “Conscious Uncoupling.”

“When I was announcing my husband and I were separating and we were trying to follow this specific way of doing it, and the philosophy is conscious uncoupling, and we like broke the fucking internet,” she said at the Fast Company Innovation Festival,

But it had been one whole year earlier when the Russian president– so popular at home he had been the subject of a recent art exhibition entitled Putin: The Most Kind-Hearted Man in the World— and his wife Lyudmila emerged from a performance of the ballet La Esmeralda. A journalist from Rossiya 24 asked them, “You so rarely appear together, and there are rumours that you do not live together. Is that so?”

“It’s true,” replied Vladimir Vladimirovich Putin, “All of my activity, my work, is public, absolutely public. Some like it. Others do not. Some are absolutely incompatible with it.”

“And we will remain always very close to each other,” Putin said, referring to their children, “And to Lyudmila Aleksandrovna,”

“We have very good relations and I am very grateful to Vladimir Vladimrovich for his continued support,” said Lyudmila Aleksandrovna.

“I am afraid to say this word, ‘divorce,'” said the correspondent from Rossiya 24.

“Yes,” Lyudmila answered, “This is a civilized divorce.”

“Colonel Corpone and his Little Porkchop.”
Jacqueline Kennedy on the Johnsons

“I feel strangely free. No shadow walks beside me down the hall of the White House.”
Lady Bird Johnson reacts to Jacqueline Kennedy’s marriage to Aristotle Onassis

“I never got to know her very well. Our lives just took different tracks.”
Nancy Reagan on Barbara Bush

“Betty parades her alcoholism like a Medal of Honor. Why is she overcoming the problem when she shouldn’t have it in the first place?”
Nancy Reagan on Betty Ford

“I think she would rather make a positive impact on the country. And I’m not criticizing Mrs. Clinton. But it’s like oil and water. We’re talking about two different subjects. They’re two different people. I think Laura thinks of others.”
Barbara Bush on her daughter-in-law

In 1969, Barbra Streisand was nominated for an Academy Award for Best Actress for her role in Funny Girl. Separated from her husband Elliott Gould, the actor nevertheless escorted her to the ceremony.

“He had arrived to pick her up high on marijuana, and she hoped no one would notice. Elliott needed to get stoned, he said, because ‘I was terribly self-conscious about being with a woman from whom I had just separated and about being among people I felt weird about, people who thrive on the dramatic implications of that kind of situation,’ he told Playboy. ‘It was a difficult night for me, a trauma.’ No one noticed Elliott’s condition, except a friend whom he had told to watch for a signal: if he was stoned, he’d tug on his ear twice when the camera first panned to him and Barbra. He did so.’ Streisand The Intimate Biography, James Spada, Warner Books, 1995.