Martin Kippenberger: “My parents always took us five children into the Folkwang Museum in Essen. My father would start a competition among us to find the best picture in the place. The winner would get one Deutsch-Mark from him. Naturally we always picked out the picture we thought he would like best, not the one that would have been important to us. We were influenced in this choice by what hung in our own living room, which meant it didn’t take us long for us to choose Franz Marc’s horses. In the end each of us got one Deutsch-Mark. This didn’t exactly help us to think freely. Father just wanted to feel he was right. And he paid his own children for that by using the side alley of art. And we gave him what we wanted. But I saw through this immediately. That’s the way our general understanding of art functions today. Don’t open anything up. Go to a museum and think yourself free?! Ridiculous. The pictures just can’t accomplish this.”

No Friction! WHEN YOU GET A BARBASOL FACE

Barbasol is first in war–first in peace

BARBASOL LUBRICATES your shaves! That’s one big reason why– at home and overseas–Barbasol is America’s favorite–favoritism bound to stay with Barbasol in the years of peace to come.

BARBASOL PREVENTS friction between your skin and razor, thanks to those fine ingredients that lubricate your shaves for speed and ease.

SHAVING COMFORT with any kind of water! Yes with hot water or cold, hard or soft or salt– you’ll be gratified with the greater comfort of a sweeter Barbasol shave.

TRY BARBASOL and get yourself a smoother Barbasol Face. When you do, you’ll understand why Barbasol succeeded in changing the shaving methods of the nation. In tubes or jars. Large size, 25¢. Giant size, 50¢. Family size, 75¢.

Thank you so much for your post card, you sent me, I have not forgotten to write to you this time. This is Baby Jumbo, The Daily Mail Elephant, which was at Weston-Super-Mare, when Marjorie & I were. I thought you would like it. Lots of love & kisses, Alice.”

F. Scott Fitzgerald’s Cameo in “The Snows of Kilimanjaro”

F. Scott Fitzgerald objected to what Ernest Hemingway had written about him in “The Snows of Kilimanjaro,” which Hemingway had published in the August 1936 Esquire:

“He remembered poor Scott Fitzgerald and his romantic awe of them and how he had started a story once that began, ‘The rich are different from you and me.’ And how some one had said to Scott, Yes, they have more money. But that was not humorous to Scott. He thought they were a special glamorous race and when he found they weren’t it wrecked him as much as any other thing that wrecked him.”

Fitzgerald wrote immediately to his frenemy:

Please lay off me in print. (Direct, and to the point.) If I choose to write de profundis sometimes it doesn’t mean I want friends (still friends, then?) praying aloud over my corpse. No doubt you meant it kindly (how could that have been?) but it cost me a night’s sleep. (Only one night: I’m tougher than you think.) And when you incorporate it (the story) in a book would you mind (gently, gently) cutting my name?

It’s a fine story– one of your best–(absolutely true, and under the circumstances insightful and generous) even though the “Poor Scott Fitzgerald etc.” rather (putting it mildly) spoiled it for me.

Ever your friend (despite all)

Letter from F.Scott Fitzgerald to Ernest Hemingway quoted in, Hemingway vs. Fitzgerald: The Rise and Fall of a Literary Friendship, Scott Donaldson, The Overlook Press, 1999 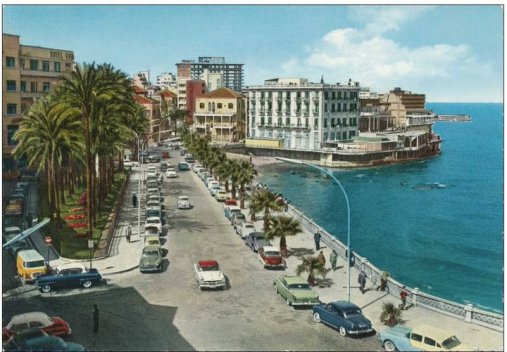 General Gamal Abdel Nasser once told his CIA contact Miles Copeland, ‘I picture Beirut as being one big night club.’ In the late 1950s, Copeland and his family lived in the hills overlooking the city. Copeland was keeping an eye on Kim Philby, who had just been cleared in another internal investigation by MI6.

Philby was sent to Beirut by the SIS to monitor political events. He had never been completely free of suspicion after his friend’s defections in 1951. His cover was his work as a stringer for the The Economist and the Observer. He lived in a fifth floor flat on the Rue Kantari with Jackie, a pet fox trained by her master to drink whiskey and use the toilet.

The tiny love notes were for Eleanor Brewer, ‘a rangy, steady-drinking American who looked tough and sophisticated.’ Eleanor was married to Kim’s friend Sam Pope Brewer from The New York Times.

Kim’s face was bloated and his cornflower blue eyes were glassy and red. ‘Slowly deteriorating and losing confidence in himself,’ was the verdict of Kim’s father, the explorer, author, and cartographer Sheik Abdullah, who’d changed his name from Harry St. John Philby upon his conversion to Islam. Sheik Abdullah thought the rumours about his son being the third man were a load of nonsense.

Sheik Abdullah–who had not divorced Kim’s mother–had moved to Beirut with his second wife and toddler sons after falling foul of the House of Saud. He’d become a celebrity in Britain after mapping the 350-mile Empty Quarter of the Saudi Interior, the largest body of sand in the world. The Daily Mail‘s Anthony Dave Brown often watched the spy and his septuagenarian father–‘potbellied and satanic-looking’– carousing at the Lido and the Kit Kat Club.

It was Sheik Abdullah who’d encouraged his son to confront Eleanor’s husband. Sam Pope Brewer was nonplussed when Philby told his friend that Eleanor wanted a divorce so she could marry him.

‘Well, that sounds like the best solution,’ he said. “What do you make of the situation in Iraq?’