Guests at George W. Bush’s inaugural candlelight dinner were presented with a twelve-page program entitled Celebrating America’s Spirit Together. It featured photographs, an introduction, the entertainment, the menu, a gold rope tasseled bookmark, and four pages of Candlelight Dinner Underwriters, Sponsors, and Hosts.

The introduction obliquely acknowledged the contentious Florida recount. “As we witness the orderly transfer of power, in the grand and glorious tradition that has become the great American heritage, we anticipate the renewal of that spirit…” David Woo of The Dallas Morning News photographed George and Laura Bush waving out of windows, the Ford administration’s masterful photographer David Hume Kennerly shot the Cheneys with their grandchildren, and Charles Ommanney (nicknamed “Chuckles” and “Lion King” by George W. Bush) shot the president and the vice president at a rally.

There is a fin de siècle feel to Celebrating America’s Spirit Together. “Linda and Ken Lay” were underwriters and Lehman Brothers, Inc. were sponsors. Just two years before the congressional cafeteria renamed chips “freedom fries,” the candlelight dinner’s “green beans” were a highfalutin “haricots verts” on the menu.

Before the Introduction of the Cabinet Designates, the tenor Dennis McNeil and the soprano Teri Bibb sang The Phantom of the Opera Medley— probably some form of “All I Ask of You.” Bibb had played the role of Christine over 1000 times on Broadway and also performed for the Clintons. The new president wore black cowboy boots embroidered with his initials and the presidential seal.

Private Eye‘s Dirty Digger appeared in the program as “Mr. Rupert Murdoch, Chairman and CEO, News Corporation.” The Honorable and Mrs. Hushang Ansary contributed–  prior to the Iranian revolution Ansary had been appointed ambassador to Washington, Minister of Economics, Minister of Finance and head of the National Oil Company by the Shah. Seventy-four people, corporations, and organizations were Candlelight Dinner Sponsors, and seventeen people and corporations (including American Express, Hewlett-Packard, and Walt Disney World) acted as Candlelight Dinner Hosts. 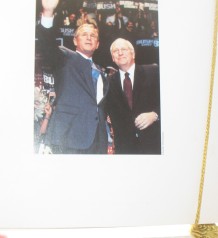 “Welcome to the Candlelight Dinner celebrating the inauguration of President George W. Bush and Vice President Richard B Cheney.

Tonight we join together on the eve of the inauguration of the 43rd president of the United States, to celebrate America’s spirit together ‘united in our heart and one mind’ as Thomas Jefferson said in his inaugural address 200 years ago. As we witness the orderly transfer of power, in the grand and glorious tradition that has become the great American heritage, we anticipate the renewal of that spirit and look forward with hope to the promise and challenge of the future.

We celebrate tonight the diversity of our people and our shared devotion to our truly unique American spirit as we anticipate our nation’s grandest and oldest tradition– the swearing-in of a new president.

Tonight we gather together to celebrate that solemn and majestic occasion and to wish Godspeed and all our best wishes to our new leadership, as they assume the power, the burden and the glory of the highest offices inour land.
Thank you for joining us in this historic Candlelight Dinner honoring our new president and vice president and in celebrating America’s spirit together.
God Bless America!”