The Drudgery of Treason

Aldrich “Rick” Ames was one of the Central Intelligence Agency’s own. His father Carleton was an officer who headed up the agency’s Burmese desk. Rick Ames joined the CIA after studying drama at the University of Chicago.  In 1985,  he was named chief of the Soviet counterintelligence branch of the C.I.A’s Soviet/East European Division at headquarters in Langley, Virginia. He stopped reporting all of his meetings with K.G.B. officers. On April 16, he walked into the Soviet Embassy in Washington, D.C. where he handed the duty officer a note with the names of two of the CIA’s sources inside the KGB. “The reasons that I did what I did in April of 1985 were personal, banal, and amounted really to kind of greed and folly, simple as that.” Ames sold his first collection of secrets for $50,000.

“It came home to me, after the middle of May, the enormity of what I had done. The fear that I had crossed a line which I had not clearly considered before. That I crossed a line I could never step back.” 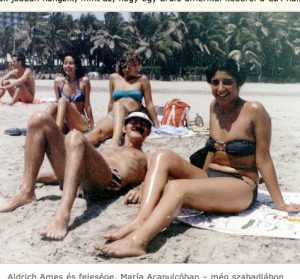 Aldrich Ames compromised over one hundred Western intelligence operations and sent ten officers to their deaths. The KGB gave him a two million dollar wedding present. He paid cash for his house in Arlington and drove a Jaguar. His wife Rosario earned a doctorate in philosophy at Georgetown and bought five hundred pairs of shoes. The CIA had suspected a mole almost from the beginning.

“In ’85, ’86, as a result of the information I sold to the Soviets, it was as if neon lights and searchlights lit up all over the Kremlin, shone all the way across the Atlantic Ocean, saying, ‘There is a penetration.'”

Both Ames’ claimed that Rosario thought the money was coming from a friend who was good at investments and didn’t know about the spying until 1992.  Electronic surveillance revealed she was actively involved in her husband’s espionage. They were arrested on February 24, 1994. Aldrich Ames was sentenced to life in prison and Rosario served five years.

1. Based on information obtained from electronic surveillance, from information found in AMES’ trash at his residence relating to his 1992 trip to Caracas discussed in paragraph 12 above, and from cash deposits made to domestic accounts by AMES subsequent to his return from Caracas in 1992 and Bogota in 1993, I believe AMES received a cash payment from the SVRR in Bogota in November 1993. Examples of information obtained from electronic surveillance include conversations substantially as follows:

Rosario: [Losing your luggage] worries me a lot with your trip to Bogota. It’s happening more and more and you know exactly what I mean. You cannot afford to lose your suitcase and so perhaps you should use a carry-on.

Aldrich: I am going to use a carry-on.

Rosario: Well, yeah, you’re putting the bulk of the stuff in that suitcase, right?

Aldrich: Sometimes, yeah, but I think I’m going to use the carry-on.

Rosario: You are going to have to be a little more imaginative about you always have this envelope with this big hunk, I mean really.

Rosario: … Now the other thing we have to do is, if you get the money, and you think it might be available, I would, what I would do would be to leave in cash, although it’s a big amount of cash to leave, but I guess it’s better. You get the money in dollars, right?

Rosario: I don’t want you to bring back anything that will make them want to look in your luggage.

Rosario: [Discussing a garment bag that was delayed by the airline arriving in Bogota] I am very, very nervous.

Rosario: I know you don’t give a shit about the suitcase, I mean okay, fine.

Aldrich: The suitcase will turn up.

Aldrich: I’m sure it will.

Rosario: I’m just hoping you hadn’t decided to pack your… and you didn’t have anything… uh.